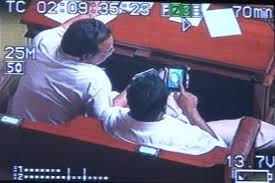 With many of us living a parallel life ‘online’, one wonders if this throbbing, invisible world is really virtual anymore?

I remember reading a chapter on ‘the Internet’ when I was in school, and quietly dismissing it thinking it was too ‘theoretic ’. I could not have been more wrong!!

Right from my cute 8-year-old neighbour in Chennai till 70-year-old retired school teacher aunty, almost every single person I know is alive and kicking in the Virtual world (http://en.wikipedia.org/wiki/Virtual_world).

Facebook, Twitter, Google wave (and many more!)… ‘being online’ is not merely a part of life, but a basic necessity for many! Facebook discussions, for example, are so real that I often find myself pondering the entire day about a single thought floating around somewhere in virtual space. Some people go so far as to claim their life has improved with being able to instantly gratify their need for friendship! We are so involved with the online world that it begins to affect our day-to-day life. We do things, go to places so we can tell the world we have done it. We argue, we strive desperately to show we are right, we eagerly seek approval.. and all this from a community that we do not ‘see’ but only ‘read’.

There is this nagging urge to make a strong online presence. It could start off with a completely useless discussion on New Year resolutions that you know will not see the light of day! Or RT-ing anything that Big B, Junior B, or Beti B say (or gurgle, as the case may be). Or even reading a controversial article and throwing barbs at the authors hiding behind a shield of anonymity.

One thing is certain – no matter what form our online participation takes, it is certainly assuming gigantic proportions. Statistics indicate that many Facebook users spend more time on Facebook than face-to-face with friends.

Basically, we do not live in one single world any more. There is this invisible, pulsating virtual world all around us, drawing us deeper and deeper each day.

I wouldn’t say it is a vice, though. Let’s take a look at the incredible benefits of our virtual world:

Keep an eye on that teenage cousin who wears two-plaits and goes to a girls-school, and quietly tip off her mom when some weirdo with spikey hair comments ‘Dat Pic Lukng Hawt’. Whatever, dude!
Find out what your retired dad is upto these days (even if you don’t really want to). ‘Dirty Picture at xyz Cinema with abc’. Gulp! Shouldn’t Zuckerberg think of introducing an upper age limit on FB users?

All the same, we suddenly have many lurking dangers!

Evidently, all these merits and demerits of the virtual world are quite tangible. Increasing awareness, thoughtful discussions, resultant mood swings(!), friendships, enemities, losses (of time) and gains (of weight!) are all real.

Can we still confidently draw the line between the online world and the real one?

Do we know when exactly a Facebook campaign suddenly gains huge momentum, facilitating a mass-protest in a country (eg., Egypt protests organized through Facebook and microblogging site Twitter)?

Why! We even saw a bunch of ‘real’ people who witnessed the Royal wedding and promptly went on to create a Facebook page for ‘Pippa Middleton Ass Appreciation Society’. The page has 241,492 fans!

We did not see this coming (And I don’t mean Pippa Middleton).

We did not realise when or how the virtual world became an integral part of the real one. When being ‘online’ changed from a one-off indulgence to a gnawing daily necessity! When the power of the online world began to threaten that of the real one. Or when thoughts floating around online started influencing mind-sets in the physical world.

What do you think? Is the Virtual world really virtual anymore? Or is it so real that it poses social and even political dangers to society?

Perhaps we should ask Kapil Sibal!

(Cross-posted on the nri dot com)